Kimberly A. Bassett
Secretary of the District of Columbia
-A +A 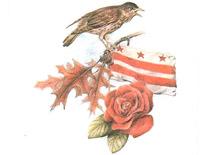 Approved on January 31, 1967, the Wood Thrush, a medium-sized thrush with the posture of an American Robin, but a slightly smaller body, became the District of Columbia official Bird. Sexes are alike, and adults are a cinnamon-brown color on their crown and nape that fades to olive-brown on the back, wings and tail. The under-parts are white with large dark spots on the breast, sides and flanks. Overall, the head appears a much richer color than the rest of the top of the body, with the tail being the dullest in color. They have a dull white eye-ring and pinkish legs. Juveniles are similar to adults, but with tawny streaks and spots on their back, neck and wing coverts. The Wood Thrush resides in forest in the eastern United States where it is more often heard than seen.

In 1898, during sewer work at 1st and F Streets, SE, workers found a dinosaur bone. Just one. A vertebra. But that vertebra didn’t match any known specimens at the time, so the Smithsonian drew what their researchers concluded the dinosaur’s skeleton might look like and put the bone into their collection.  In 1998, the centennial of the discovery, some enterprising DC Public School students at Watkins and Smothers Elementary School lobbied the DC Council to dub it the Capitalsaurus [PDF] and declare it the official dinosaur of the District of Columbia.  They also designated 1st and F, SE, as “Capitalsaurus Court.”  See the Capitalsaurus Resolution [PDF].

Approved October 25, 1938, the flag of the District of Columbia consists of three red stars above two red bars on a white background. It is based on the design of the coat of arms of George Washington, first used to identify the family in the twelfth century, when one of George Washington's ancestors took possession of Washington Old Hall, then in County Durham, northeast England.  For heraldic reasons, the stars are properly called mullets. See the DC Flag Protocol Manual [PDF].

The Scarlet Oak was approved as the official tree of Washington, DC, on November 8, 1960. Scarlet oak, Fagaceae Quercus coccinea, also called black oak, red oak, or Spanish oak, is best known for its brilliant autumn color.  It is a large rapid-growing tree of the Eastern United States found on a variety of soils in mixed forests, especially light sandy and gravelly upland ridges and slopes.  Best development is in the Ohio River Basin.

Sedimentary and igneous rock layers recrystallized to become the metamorphic rock of the Piedmont. Quarries along Rock Creek, and at Little Falls, Maryland, provided Washington, DC with building stone from the Piedmont’s Sykesville Formation, also known as Potomac Bluestone (Gneiss). Foundations of the White House, Capitol, and Washington Monument, along with buildings like the Lock Keeper’s House and the Old Stone House in Georgetown were built with the Sykesville Formation.